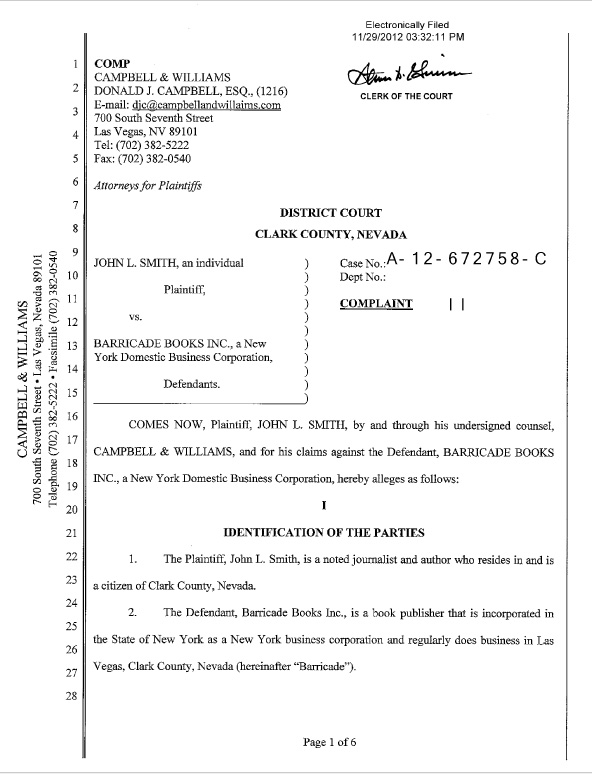 That’s the way the O’Jay’s lyrics went at the beginning of their song called, “For the Love of Money” – repeated six times in a row. It was a catchy pop tune from back in the 70s and it seems to capture the core of what John L. Smith is all about: hanging onto that money!

How else would you explain it? This is a guy who gets paid a six-figure salary, had more than $200,000 in cash through various accounts, including retirement accounts, had a nice, pricey home that he lived in and could have used as an asset, yet opted to arrange for his daughter to go to the Ronald McDonald House for cancer treatment, which is set up for low-income families of little means who can’t afford costly medical procedures. Saving all his cash for what, his divorce?

Then, after getting hit with a $15 million libel suit, he files bankruptcy and stiffs other doctors and medical facilities who had helped treat his daughter. Nice.

Consider also, a few years back, the the lawsuit Smith slapped on the publisher of one of his books, “Running Scared: The Life and Treacherous Times of Las Vegas Casino King Steve Wynn.” The suit was filed to try to force the publisher, Barricade Books, to give an accounting of the sales of that book and show royalties that were due to be paid to him. Smith’s lawsuit claimed that the book was in its 15th printing and that Barricade had collected hundreds of thousands of dollars on the sales of the book. Smith thinks there’s somewhere north of $10,000 in royalties owed to him.

A quick Google search of the book shows it’s available for as low as $1.00 through eBay. You could also order it for $2.94 from Barnes & Noble, $3.59 from Overstock.com, $5.99 from Biblio … you get the idea. It’s not a high-dollar item. But I guess JLS wants to try to squeeze every penny out of the deal.

(By the way, the production of that book also generated a $3.1 million libel suit filed by Steve Wynn against the publisher, Barricade Books.)

Barricade Books may be one of the sleaziest book publishers out there. They say they are an independent publishing company specializing in non-fiction titles and featuring biography, memoirs, true crime and Mafia titles. They also seem to like to court controversy. Just check out a few of their juicier titles: “Naked Came the Stranger,” which was written to be bad, and full of sex, as something of a hoax by a group of writers trying to show how awful and debased American literature had become, “Ordeal” by Linda Lovelace, “The Sensuous Woman” by “J”, “Sex and the Single Girl” by Helen Gurley Brown, to name a handful.

Come to think of it, I guess Smith trying to squeeze as much as he can out of that deal with Barricade might be necessary for him now. Remember, the man who slapped a $15 million libel suit on him years ago, multi-billionaire Sheldon Adelson, just became the new owner of the Las Vegas Review Journal, where John L. Smith works as a columnist.

If you’re John L. Smith, that’s got to make you a little nervous, don’t you think?